Last weekend we headed to the Loughborough Town Hall for their first Wedding Fair. Despite the weather being temperamental, it was a great event, and a perfect opportunity to meet with couples and showcase a few of our services. Their Wedding Fair ran between 10.30am and 4pm. Along with plenty of wedding suppliers from across the Midlands, we showcased why couples should book our services. The Loughborough Town Hall has reopened their doors to Wedding celebrations and we think its a unique alternative to a country house or hotel venue.

On the day we were upstairs in the Victoria Ball Room. A grand room dressed for a wedding with our white LED dance floor in front of the stage where the band played. On the day we also took along our Magic Mirror which we set up and allowed people the opportunity to dress up, strike a pose before having a picture! 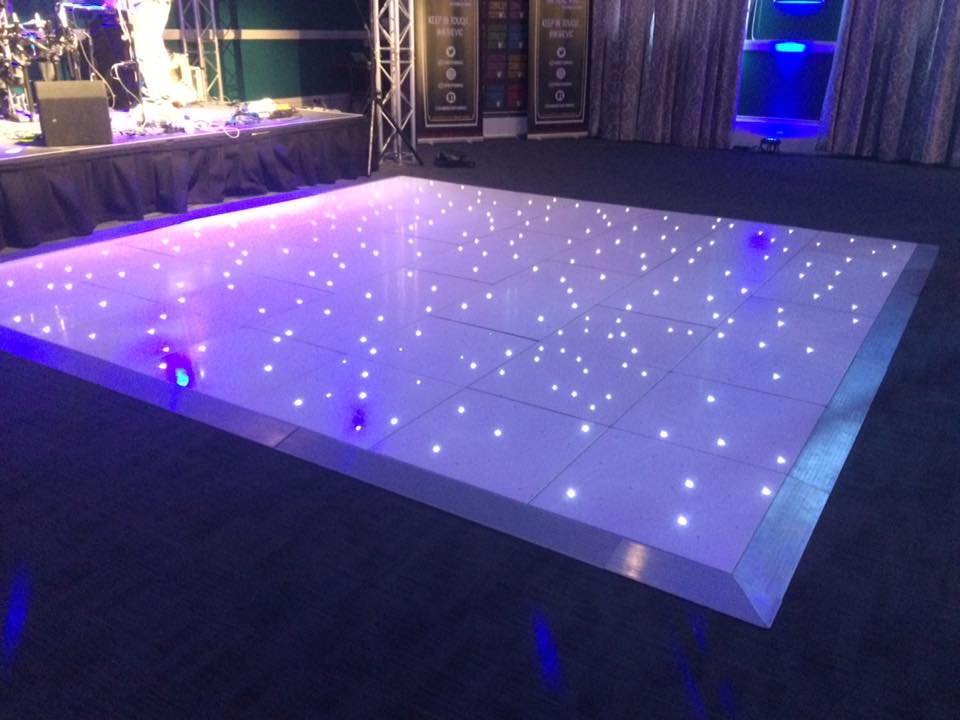 On the morning of the fair, we headed over to lay our 14ft x 14ft White LED Dance Floor in front of the stage. Loughborough Town Hall would usually provide a wooden floor of this size however they asked us to lay our Sparkly one. It really did bring the room alight, specifically in front of the stage. Performing on the stage was the UK’s Premier Rock and Pop Covers Band, UNCOVERED. This band were fab to listen to and really created an atmosphere for the fair, they did 3 or 4 sets for the duration of the event. They even got a few people dancing along with them.

At the event, we also took along our Magic Mirror hire, a great alternative to a traditional photo booth. A number of people at the fair enjoyed giving it a go and seeing how it really works. People were commenting on how quickly the prints came out and how clear the pictures were.

The event was organised by Nick who was available throughout the day to show people around the venue. We are very much looking forward to working closely with Nick in the future.

Also exhibiting during the day was David Fox. David is a magician who over the years has grown to become a friend of Louise and Jack’s after showing off his magic at our wedding in 2013. It was also great to see Singer and Caterer James Green and Primo Jewellery at the event.

We look forward to working with Loughborough Town Hall in the future for weddings and special occasions.

Keep up to date with Jackstar on social media!